A blog by Catherine Leonard, INTO Secretary-General

This week, 25-28 June 2019, we are in Gelderland on a study visit for the Innocastle project.   The programme involves visiting a number of country houses, a symposium with stakeholders from the province and various partner meetings.  The full programme can be found here.  One of the best bits is going to be catching up with INTO friends from the Gelderland Trust.  But we’re looking forward to exploring all the beautiful sites and meeting all the passionate people who look after them.

The first day began with a project partner meeting.  Very important to keep on top of all the tasks and budget whilst we are all together!  We then set off by coach to visit four manor houses.  Four seemed like quite a lot but then you realise they are cheek by jowl here (completely amazing!).

We saw how Middacthen had benefited from close co-operation with the local authorities and the local population, in the form of volunteering.   The privately-owned estate benefits from the gifted time of over 120 volunteers.  And we saw a group of ladies working hard in the herb garden.  We also enjoyed refreshments in the Orangery and a tour of the whole beautiful garden. Much that was familiar: from the grass tennis court to the pet cemetery!  But actually in the very feeling of the place.  I was interested in the ‘One Tree’ project or ‘1-boom’.  An ancient oak from the estate was felled and then used in all sort of art installations and crafts. The project showed how traditional forest management and contemporary arts can go hand in hand. Moreover how important wood is for the region and how it can inspire designers and artists.

The restoration work at Reuversweerd is not only very high quality but also a learning place for students.   The ‘movable shed’ provides an excellent classroom for vocational training.  The team are also working out how to tell the painful stories of World War II.  The owner closed down Reuversweerd after the war, when it was damaged by Canadian mortar attacks.  It was left boarded up for seventy years before an entrepreneur decided to buy it.  He plans to turn it into an executive retreat.  But he wants to tell the full story in the restoration.  So, how to preserve the bomb damage and eerie quality of some of the rooms? 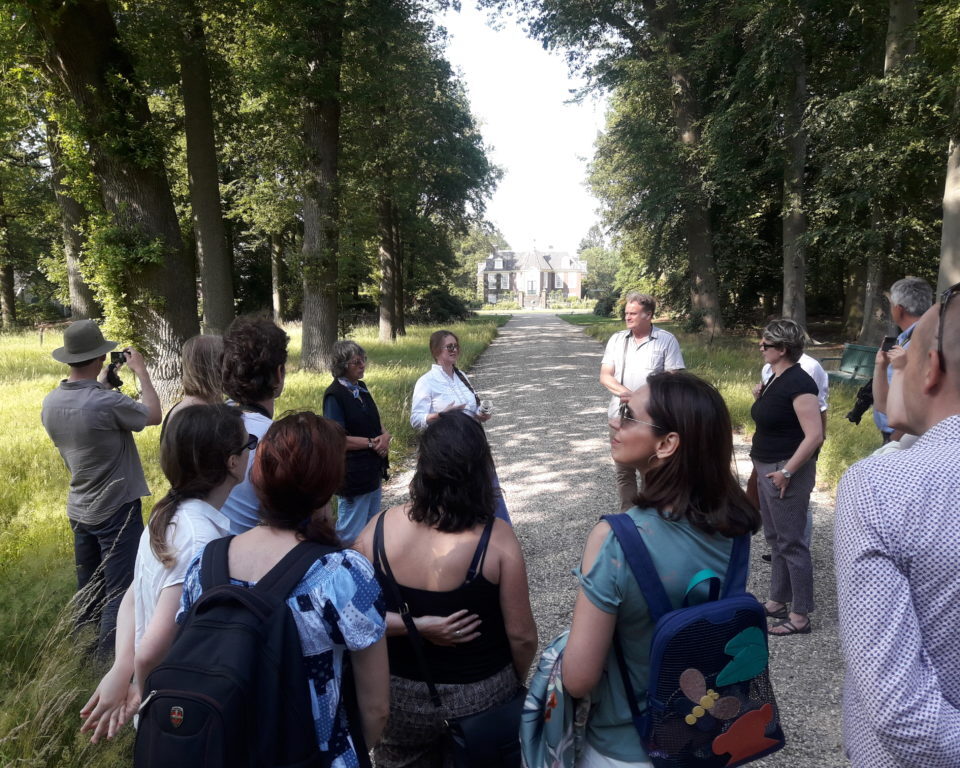 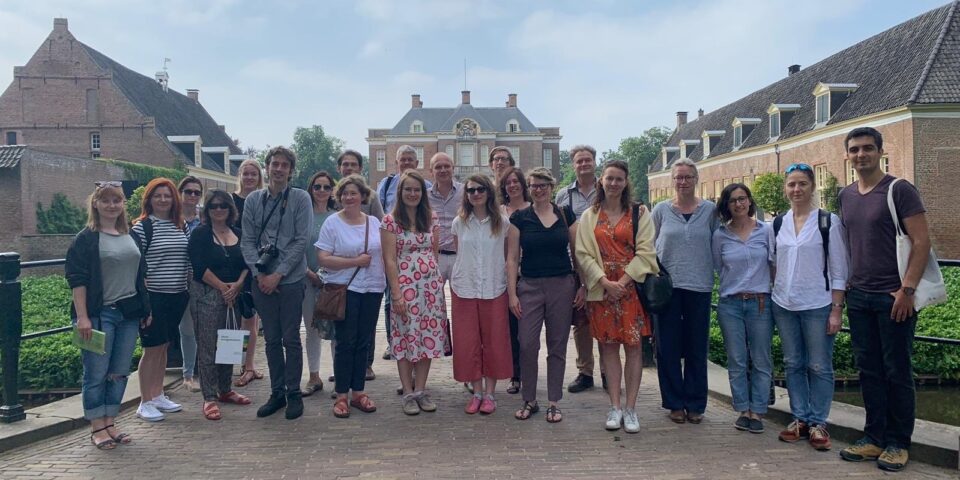 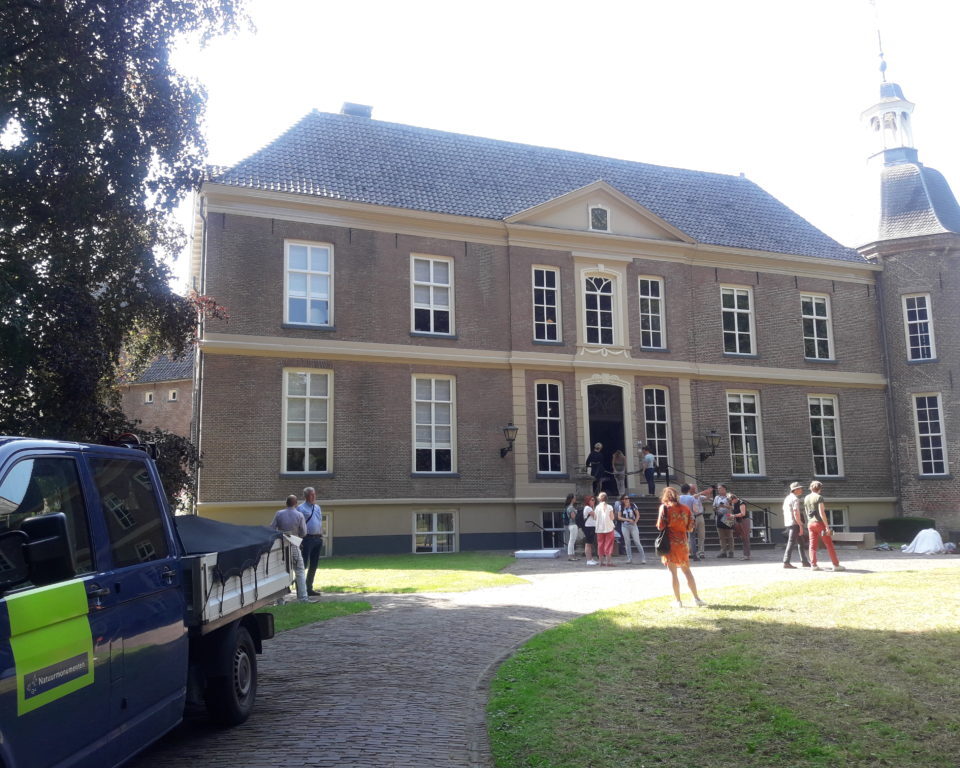 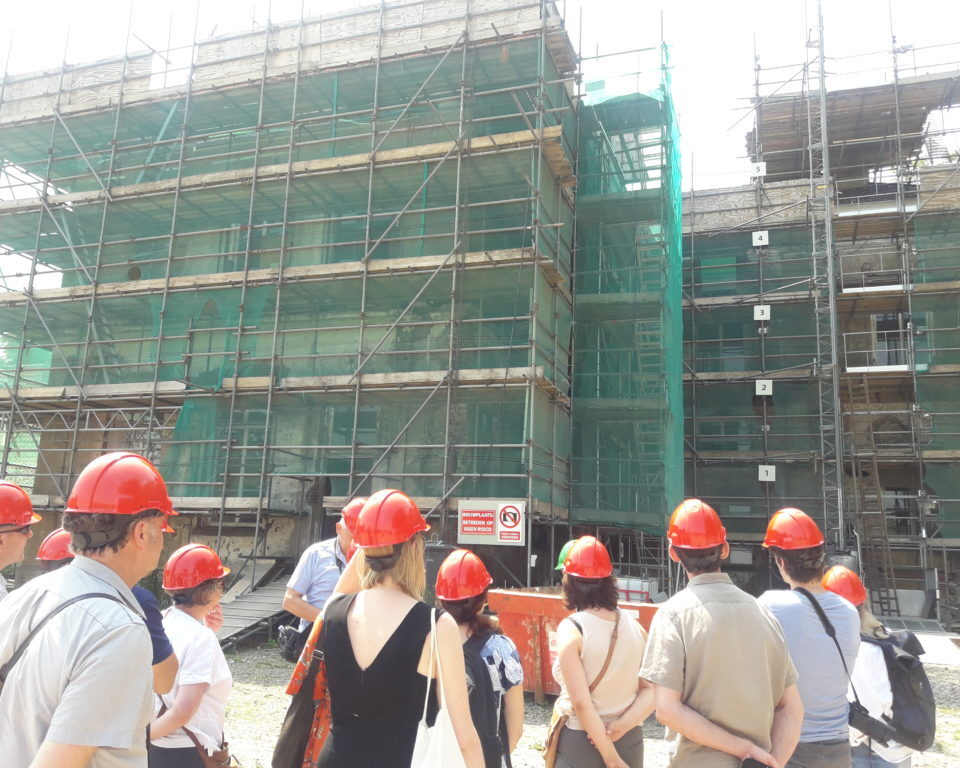 Natuurmonumenten took on Hackfort in the 1980s after the last of the family died.  They continued to rent out the apartments to begin with but recently decided to convert them to holiday lets.  We visited on the eve of the grand opening, which was fascinating.   The apartments are beautifully decorated, and each is named after the previous family occupant.  They sounded very interesting characters!  The Count liked to drink his wine from glasses with no ‘feet’.  And there was no electricity in the whole house when Natuurmonumenten acquired it!   It was interesting to see an estate in multiple use: holiday lets, house museum, restaurant and other businesses, farming and nature reserve.  And the impact this has on car parking, the need for more volunteers, the bike trail.

The last site on our tour was De Wiersse.  This is a charming garden with around 6,000 visitors a year.   We were shown around by Anglo-Dutch owners, Mary Gatacre and her mother, Laura.  They both took the time to share their favourite spots and stories, which was really lovely.  It was interesting to hear from the local water board about plans for reinstating the old stream.  The river was canalised in the 1960s when the Dutch needed to grow more food after the war.  Now, because of climate change, it’s more important to keep the water.

We had supper in an extension to the old garage.  Built to accommodate a car collection which never materialised as the family’s money ran out!  It was the most beautiful garage I’ve ever been in, that’s for sure! And it was a truly spectacular evening.  I sat next to Mary and she told me they could not survive without the subsidies they receive.  Alongside rent from the farms.   Part of the challenge is a large garden and small estate.   Mary also told a lovely story about doing conservation work in Romania when she was 18.   Irina Leca knew the project (from the Mihai Eminescu Trust) very well and the people involved, which was a lovely connection.